The reason I’ve been quiet on the blog front for the past month is that I’ve been away on holiday in France, (which was very nice, thank you for asking).

I didn’t want to say it in advance as I was worried that some of you might actually be burglars. Or, at least, be acquaintances with members of the criminal fraternity.

As stunningly beautiful as Brittany is, my poor soul has been deprived of art this past while so to satiate my yearning for redemption, reflection and inspiration I took the train into Manchester to visit the Manchester City Art Gallery on Mosley Street.

Now, my only experience of Grayson Perry in the past have been as a guest on Have I Got News For You.

So, to see his work for the first time was a bit of an eye opener for me. And I wasn’t disappointed.

His work is quite traditional on one level, in that he’s a very good draughtsman. (Which means he can actually draw.) But on closer inspection the subject matter is quite deviant. Which I also love. I think it’s the adman in me that loves the unexpected.

This particular piece is called: Print for a Politician. It’s done in the style of a Chinese watercolour / etching.

Print for a politician by Grayson Perry

Here’s the blurb that the gallery use:

“Print for a Politician (2005) is only the second print that Perry treated as a major work; it took over a month to draw. The etching shows groups of people including academics, fundamentalists, northerners, parents and transvestites in a landscape setting, each group given a name, like a place name on an old map. All the groups are armed for battle, with weapons of war from different periods and cultures. Perry’s intention for this work is to show the complexity of human society. He hopes audiences will identify with one or more of the groups and realise it is possible to live together peacefully despite our differences.”

What the blurb doesn’t say is that it’s actually quite funny. You look at the ‘groups’ like ‘Middleclass’ and they’re depicted as whip-toting sexual perverts.

Print for a politician, detail. 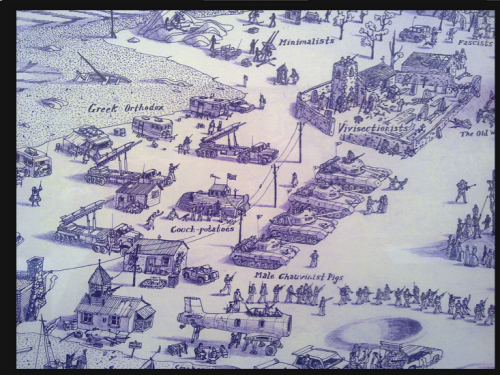 A word of caution if you’re thinking of going: There are only about half a dozen pieces of Perry’s work in one of the smaller rooms. Don’t let that put you off though as there are loads of other brilliant paintings to look at.

What with this depression and all, I think we’re on the cusp of an important era in art.