Nope, there’s no reason why I wrote that in Japanese. Except that I ended 2019 in French, so I guess it’s tradition now.

I’m just going to fizzle out of 2020 with some more work that I’ve done since the Reflections on Lockdown series back in September.

If you follow me on Instagram you will have seen most of it already. If you don’t, you won’t.

I’ve been experimenting with collage recently. Not a medium I have much experience in. For some reason, the numbers 2121 have been popping into my consciousness quite frequently.

Those of you who believe it’s some sort of divine message might be able to enlighten me. Those of you who just think I have some form of apophenia may want to call me an ambulance.

Anyway, I decided to express these occurrences via the medium of collage. There are four in total, but the last one isn’t finished.

Next up is a series of abstract pieces which I have titled: From order comes chaos / from chaos comes order.

I won’t show them all, because I’ve done loads. The premise is – the universe can seem a bit of a chaotic place, what with stars exploding and imploding, nebulae forming solar systems, black holes Hoovering up everything in their vicinity, etc. And that’s before we get into meteors crashing into planets causing all sorts of tidying up to be done afterwards.

Yet, out of all of this seeming ‘chaos’ there is so much order, structure and geometry to the universe. Not to mention the structures that we humans impose on the world around us, whether for good, or ill. Ultimately, everything returns to the ‘disorder’ to be recycled again into something new.

Anywhoo, that’s what I think.

I like to sketch quite a bit. Portraits and still life mainly. Just for practice. (And for my own insecurity to prove to people I can actually draw.) Kind of.

All of my artwork is for sale should you wish to terrify anyone this Christmas. Just message me for details.

It just remains for me to wish you a very happy Christmas, if you celebrate that sort of thing. And/or very happy holidays if you don’t.

If others are involved in your task, they may see your experimentation as indecision.

Ignore that gnawing urge to placate them for an easier life, and press on with your goal.

Only then, will you hope to attain something that you can be 85 – 90% satisfied with.

Computer games hadn’t been invented when I were a lad.

Come to think of it, neither had computers.

I used to while away the hours playing with my toy soldiers and model aeroplanes.

I had hundreds, if not thousands, of centimeter-high military figurines all vying for supremacy on the living room carpet: Paras; commandos; stormtroopers; gurkhas; chindits… you name it, they all fought on the beaches [rug] of Normandy [sofa].

Now, I know things have moved on a bit since then what with all the incredibly sophisticated graphics on computer games, that I suppose pretending your sister’s dolls’ house is an impregnable German fortress seems positively kid’s stuff.

But my point is, that whilst computer games have incredible cgi and complex storylines, they do spoon-feed the player. The player may think they’re in control of an elite squad of navy seals, but they are, in fact, just being lead down a labyrinth of computer code like lambs to the slaughter.

Playing with soldiers on the rug required imagination. You were in control. You made up the story. You decide what happens. Are computer games actually stifling kids’ imaginations?

Obviously, the super-intense scenarios weren’t there – or were they?

You see, when I played, I didn’t see a cushion or a sideboard, I saw a hill and a bunker. My imagination filled in the gaps.

So it got me thinking about whether I could do an ad campaign to resurrect these tiny little plastic armies to appeal to today’s kids.

Not to replace computer games, just to be an alternative.

(This is where some mums and dads object to promoting toys that encourage violent behaviour. Well I say: Come down ‘ere and say that yer shandy-drinking tree huggers! Never did me any harm.)

Whilst my idea isn’t based on research of the target audience, it is based on the insights of someone who’s played both.

I love the illustrations on the packaging as this, to me, accurately depicts what the child imagines. While the headlines juxtapose the dramatic imagery with the real-life environment the game would actually be played in such as a bedroom, living room etc. 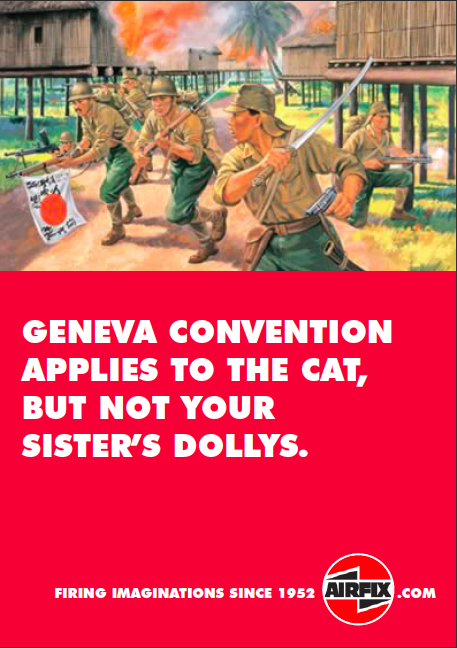