Things for which I’m grateful #356 – Advertising.

It’s hard to think of an industry more vilified by the general public than advertising. With the possible exceptions of bankers and estate agents. Oh, and insurance companies. We’re all wankers in the public’s eyes. It’s true that I’ve met quite a few charlatans in my time but I’ve also met lots of lovely people whom I admire, respect and have maintained long-lasting friendships. Advertising has given me many happy years coming up with ideas for stuff. Then having them bludgeoned to death by account handlers and clients. I’ve had the opportunity to collaborate with some fantastically talented directors, photographers, illustrators, writers and art directors. I’ve also had the good fortune to have gone on the odd exotic TV shoot. 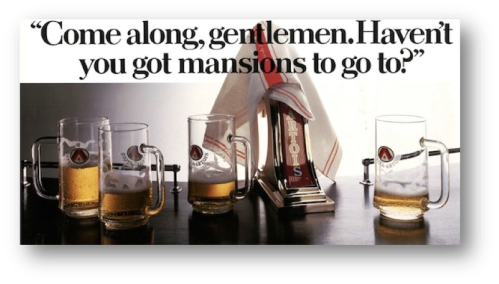 In my 30 years in the ad industry I reckon I’ve only had three decent jobs out of about – actually, I genuinely can’t remember how many jobs I’ve had. The three best agencies I’ve worked for were BRAHM in Leeds, Owens DDB and Chemistry, (both in Dublin). They probably account for about 10 out of my 30 years in advertising. That’s a long time spent working in crap agencies. Of course, young hipsters will think someone like me is past it. I’ve heard a few digital johnnies bleating on about how traditional advertising doesn’t engage in a dialogue with consumers like online media can. Bollocks. As soon as you get a customer thinking about your ad you are engaging in dialogue. Whether that’s via the medium of television, press or on a billboard. 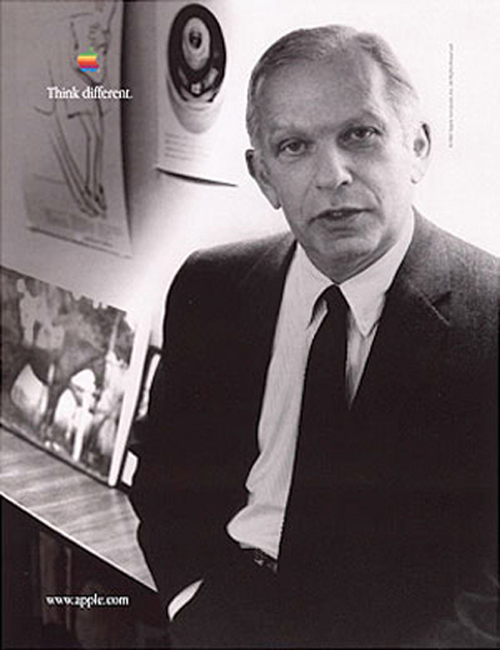 Just because you have the capacity for a customer to literally respond to your message on social media doesn’t mean you’ve entered into a dialogue with them. In fact, judging by the mass majority of offer/promotion-based ads on social media, I would argue that this is monologue, not dialogue. The key to a successful engagement with a customer is to have an idea that resonates with what’s going on in their life. Without an idea, you have nothing. And, what digital johnnies lack is the ability and experience to come up with big advertising ideas. Of course, there have been one or two great online campaigns. (Old Spice springs to mind.) But not enough. And ad agencies today need to go back to the old ways of doing things but with today’s media and technology. Is it just me, or is there a dearth of good advertising around?

Advertising is very simple: A great idea should contain two things: An insight into your target audience and a brand/product truth that will match the consumer insight. For example: If only everything in life was as reliable as a Volkswagen.

A + B =     Ta-dah! (Told you it was simple.) It’s often overcomplicated by people using big words to make themselves look more intelligent who try to portray it as a science. Great ideas come from great propositions. Here are a few straplines from yesteryear, when advertising was great. See how many you can match to their brand. (And they’d all translate brilliantly to online media.)

That doesn’t mean that every ad campaign needs a strapline. (The Economist being a good case in point.) What a great strapline does is encapsulate the client’s strategy, which each individual concept/execution has to fit into for consistency of message.

So my advice to any young whippersnappers out there thinking of a career as an art director or writer is, whatever you do, don’t rock the boat. Tip the fucking thing over. There are too many safe-sailor-suits and bland-brand-bosuns as it is. N.B. None of the examples of great work I’ve shown here are mine.

Of the places of work I have really enjoyed working, I would have included TBWA Manchester – a really great team of people and a cracking account to work on. But, as I was only there a wet weekend, it seemed a bit of a stretch to include it. For the all too brief period of time I was there, I enjoyed every minute of it.

Would you eat dog for McDonald’s?

“It’s a dog eat dog world. And we want you to eat dog,” said one McDonald’s exec to me in a presentation.

By this, I presume he wanted us, (his advertising agency), to be more ruthless. (Whilst simultaneously failing to see the irony of his comment.)

The reason I mention this petit anecdote is: Moral high-ground.

And how easy it is to take up this seemingly invincible position.

In a recent interview, I was asked if there were any clients I wouldn’t work for.

The first one that sprang to mind was McDonald’s. Not because of what they sell, but because of the disagreeable nature of the people who ran the franchise in Ireland.

Other obvious targets are oil companies and banks.

Bar tobacco, I said no. Because I don’t know enough about any particular company.

Once you start unpicking the stitching of an organisation where do you stop? I don’t know if Heinz bank with an ethical bank that doesn’t invest in arms. Or the kebab meat in my doner is from organic free range cats.

I think it’s lazy and naive to think you are made of a higher morale fabric because you only drink fair trade coffee or bank with the Co-op.

Don’t get me wrong, I’m not advocating that we throw our morals out the window with our copies of The Guardian. No s’ree. I think it’s important to do the right thing as often as we can.

But sometimes people spout guff about stuff that is wrong when they don’t know the bigger picture.

For example, do you know where the minerals that make your mobile phone heat resistant come from?

Didn’t think so. (And neither did I.)

The following tidbits are from a brilliantly enlightening article I read in The Guardian Weekend supplement by Lucy Siegle called Are you sitting comfortably?

The cassiterite in your mobile phone could quite easily be from illegal Congolese mineral mines which use child labour. When I say mine. It’s more of a hole in the ground barely wide enough to fit a 12 year old down.

Got a real Italian-leather sofa? When was the last time you saw a cattle ranch in Italy? Chances are, the leather is from Brazil. Where illegal state-sponsored deforestation of the Amazon rainforest is taking place.

What about the computer you’re reading this on? If it’s an Apple, (like mine), they’re assembled by a 400,000 strong labour force at the Foxconn factory in China which is in breach of Chinese labour laws. (Apparently, Sony, Dell and HP are equally culpable.)

Got kids? Me too. Bought any toys made by: Mattel (Barbie); Lego; Disney or Hasbro? I know I have.

According to Greenpeace, their toy packaging is made from tropical hardwood fibres from protected Indonesian forests.

The article goes on to talk about coffee; cashmere; cotton; denim and flatscreen TVs.

Of course I’m not saying we shouldn’t give a hoot because we don’t know where stuff comes from. Or that we should remain silent when we do.

I just think it’s easy for the middle-classes to get all holier-than-thou about the stuff that makes the headlines when they’re sipping their Columbian Latte. But it’s quite a bit harder to live your life by these self-imposed morals once you start digging. (Metaphorically of course, I wouldn’t advocate getting someone under the age of 16 to do it for you.)

A bit more transparency on where products, ingredients, materials etc are sourced on packaging would be a good place to start. But we would need government legislation to force companies into doing this.

After reading this post, a friend by the name, Chris Miller, gave me a link to this brilliant website called Slavery Footprint.

Basically, you key in the type of lifestyle you have and it calculates approximately how many slaves you have working for you around the world. You can then lobby the powers that be about it.

Apparently I have 88.
Two fat ladies. (They do the cleaning on Thursdays.)

Unlike my wife, who only has one.

Bill Bernbach revolutionized the ad industry from the inside back in the 60s.

Steve Jobs revolutionized it from the outside in the 90s. (Depending on where in the globe you were plying your trade.) In Scotland, they think an Apple Mac is a new dessert at McDonald’s.

But our industry has never been the same since. I doubt there are many art directors and writers, (not to mention designers), who don’t have a Mac on their desk or in their bag.

Ask anyone who owns a Mac and they’ll tell you they’ll never touch a PC again.

Not content with revolutionizing the advertising and design industry, he also set about working his magic on the music and telecommunications industries too.

Tell me, how did we live without our iPhones?

Here are a couple of ads paying homage to Steve Jobs. I’ve selected these because they are my favourites. But you can see more here:

If you’re not in the ad industry and you’re reading this, then you might not ‘get’ the ‘Thought Different’ homage to Jobs. It is based on an ad campaign which was about “crazy people” who thought differently.

Interestingly, if they made this TV ad today, Steve Jobs would be in it.

Apparently, Steve Jobs is doing the VO in this version. (Later to be revoiced by Richard Dreyfuss.)

I don’t know Steve Jobs, so I’m pretty sure, like the rest of us, he has a few skeletons in the cupboard. Some scarier than others. And I’m also pretty sure that there are quite a lot of other unsung people at Apple who have contributed to the company’s meteoric rise to world domination. But… let’s let the poor fella go cold before we start vilifying him.

Like it or not, Steve Jobs was a visionary.