The Ethics of Crowdfunding Assassinations. Or, “How I topped a Toff”. (Part 1.)

I was sitting on the bus the other day, on the way to collect my dole money, (being the work-shy scrounger that I am), when I happened to earwig in on a conversation by two assassins sitting on the seat in front of me.

I could tell they were assassins because one was dressed like a ninja and the other like a navy seal but without the military insignia.

Anyhoo, they were discussing whether they thought they could get crowdfunding to assassinate George Osborne and Iain Duncan Smith, as they didn’t reckon their Job Seekers Allowance would cover it.

Whilst I obviously don’t condone murder per se, my ears pricked up, as I had never heard anyone discussing the finer points of crowdfunding for such an endeavor – even if the targets in question were totally deserving of such a fate.

First of all, they went through a “wish list” of things they might need to carry out their task: a high-powered sniper rifle; a couple of Glock 9mms; ammo; some ninja throwing stars; a super-fast getaway car, (along the lines of a Nissan Micra); some factory workers overalls; some waiters uniforms; and two bags of cheesy Wotsits just in case they had to do a stakeout.

This final point caused quite a kerfuffle, as the ninja said in no uncertain terms that Wotsits tasted of belly fluff and that he preferred Monster Munch. The seal compromised and a bag of each was added to the list. (Along with a can of diet Coke and an Innocent smoothie.) 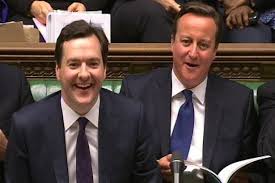 They also reckoned they would need about half a mill to bribe a government official to get info as to the whereabouts of the two miscreants during the year.

All in all, these two would-be Lee Harveys totted up that they would need about a million quid to successfully carry out their mission. (Excluding a couple of Easyjet flights to the Costa del Sol afterwards.)

I didn’t think a million quid was too bad to pop a cap in the bottoms of two of the most nefarious politicians since the rise of the National Socialist Workers’ Party.

They even drew up a list of funding options, ranging from a tenner for a, “I topped a Toff” t-shirt, to a hundred quid for an invite to the afters street party. (This they reckoned would be a big seller.)

They also talked of being able to attend the actual assassinations for a grand per person. But weren’t too sure about the practicalities of this, as a large, cheering, placard waving mob following them around might not be best for covertness.

After a time, they began to doubt the logistics of it all and whether people would get into the spirit of things and chip in. So they turned to me and asked me what I thought.

I said that I absolutely and utterly did not condone murder and, had my iPhone not run out of battery, would’ve probably reported them to the police, (which they empathised with, being upstanding citizens an’ all).  However, hypothetically, I asked, wouldn’t it be easier for the two little tykes to simply do the whole lot of them in at once and take out the entire cabinet?

They complained that this was a risky strategy and that they’d never in a million years get access to the cabinet.

So I says, give the million quid and a bomb in a lobster thermidor to Iain Duncan Smith, he’d sell his own mother for a sturgeon canapé. Sure, hasn’t he been sponging off his missus for the past thirty years?

“Yes,” I said. “But you can do him in afterwards. When he’s under the viaduct kicking the shit out of a homeless person.”

They seemed to think this was a good idea.

Anyways, my stop was coming up, so I bid them adieu.

I don’t know what the legalities are of crowdfunding the assassination of high-ranking politicians, but it has to be worth a shot.