The gift of the notebook

If you’ve read my previous post you’ll be aware that I’m going through a period of ‘writer’s block’, so I’ve been dabbling with a paintbrush instead.

Another thing I’ve been doing is going through some old notebooks. I have scores (if not hundreds) strewn around the house in various boxes, on bookshelves, in bags and suitcases, cupboards and wardrobes.

I always have a notebook on the go to jot down ideas or do a little sketch in. The problem is, I hardly ever look back on them. I guess the thinking is, that if the idea didn’t present itself at the time, then it was probably a rubbish idea. For the most part, this is true. But, occasionally, a little gem pokes its head to the surface. (And, wasn’t that the point of the notebook in the first place?)

I came across a poem I wrote in 2000. I can see why I didn’t take it any further at the time, but with a bit of jiggery-pokery I think I’ve got something quite nice. (See below the photo.)

So, the moral of the story is: 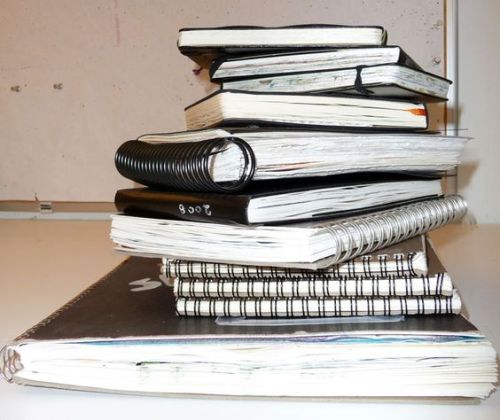 I inhale your words as you exhale them.

And I place them into separate categories:

Those that I wish to retain,

And those which I do not.

Words such as ‘terminate’ and ‘over’,

I place into the carbon dioxide pile,

To be expelled into the universe

As quickly as possible.

But the words of love and affection

I send directly into my bloodstream,

To feed my heart and my brain,

Keeping my soul sane, for a few moments longer.