I’ve written a couple of pieces of flash fiction, about 100 words apiece. The first one is about the state of globilisation and the trashing of the planet. The second is about refugees in the Mediterranean.

When I was floating around in the uterus, the Universe asked me a question, “There are two worlds you can choose to live in: The first has rivers, lakes and oceans teeming with all kinds of fish. It has mountains and forests where wild animals graze. It has fertile fields where you can grow all manner of crops.

“The second is ravaged by war, famine and inequality. Corporations strip the planet of its resources for their own profit. 1% of the population controls 98% of its wealth. But you will not be one of them. 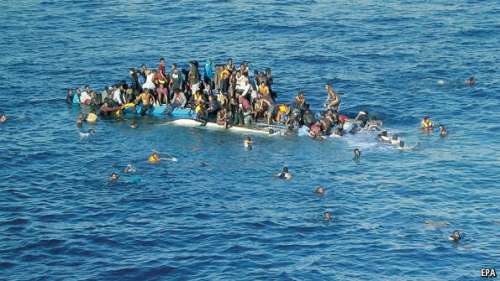 The boat is taking on water. There is no land in sight which they could swim to. There’s no coast guard on the horizon, nor search and rescue helicopter in the stormy sky. There are no life jackets for the refugees on board. The fifty-four men, women and children who fled war, famine and persecution are crammed into a lifeboat meant for thirty. They cling to hope like they cling to the gunwale slipping beneath the surface of the inky-black sea. The children search their parents’ eyes pleadingly. “It’s going to be all right, isn’t it, Mama?”

The anger and frustration were risible behind Jeb’s gritted teeth. He wanted to lash out at the person standing in front of him with the smug grin on his face. But he knew that that would cost him his job. In this “P.C.” age he lived in it was deemed unacceptable to beat one’s co-worker to a pulp. If not him, anyone or anything in general would suffice, such as: his pet Syrian hamster in its cage at home. He could pluck it up and wring its scrawny little neck or snap its spine in half and crush its squidgy innards. Not that the hamster had done anything in particular to warrant Jeb’s wrath – apart from leaving droppings and straw all over the house – which was actually reason enough. No, it would preferably be a human.

The problem was, Jeb wasn’t blessed with fighting prowess, either physically or technically. He was average height and had a scraggy physique and concave chest. He had gaunt cheeks with bulbous eyes and a hooked nose. His heart was palpitating and his palms sweated as the man from accounts poked fun at him.

Apart from his physical shortcomings he wasn’t bestowed with a quick wit or more than average intelligence either. All of which made him a fairly unremarkable specimen of Homo sapiens and quite an easy target for jocularity. It was this latter fact that was the nub of Jeb’s dissatisfaction with life’s lot. He wanted to be somebody. To do something. But the fact was, he lacked either the imagination or the skill sets to achieve… whatever it was he wanted to achieve.

Instead, he just stood there by the coffee machine in the makeshift kitchen area, hands trembling, face flushed bright red, surrounded by his colleagues who were all laughing at him for having thought Kanye West was a holiday destination in the Florida Keys. To be fair to Jeb, this was only on account of the aforementioned accounts man, Brendan Tucker, telling Jeb that Kanye West was the ‘in-place’ to holiday that summer and was he thinking of taking his vacation there? When Jeb responded in the affirmative and that, in fact, he had already booked his flight, was when his teammates all fell about guffawing at his expense.

On one occasion, at an office Christmas party, a couple of years previously, Jeb had attempted to boost his image by hiring the services of a young, glamorous escort whom he attempted to pass off as his girlfriend. When ‘Crystal’ arrived at his home, she was neither young, nor glamorous. Nor was she particularly attractive. She had corkscrew peroxide blonde hair, pockmarked skin and a bright red skirt that could easily have passed for a cummerbund.

On arriving at the office party which, incidentally, was on the theme of Saints and Sinners, making Crystal instantly feel at home, she promptly disappeared to the loos leaving Jeb alone at the accounts table sipping a dry sherry.

A few days after the ‘coffee pot’ incident, Jeb arrived at work in the open plan office wearing a very loud, short-sleeved floral shirt and proclaimed that he was going on holiday to Kanye in the south east of Botswana the very next day. Moreover, he was specifically going to the western part of the town. (He emphasised the ‘western’ part.)

He regaled all who would listen, (which was Mary from admin and John from maintenance), that Kanye was founded by European settlers in 1853 and that it was his love of both Africa, and history, that had prompted his choice of holiday. And, when Brendan had first mentioned going on holiday to Kanye, Jeb said he had misheard the part about ‘Florida’. Sadly, Brendan wasn’t there to hear the news firsthand, but Jeb was certain that the office grapevine would successfully deliver his news and put Brendan Tucker firmly in his place once and for all.

Unfortunately, that’s about as far as Jeb’s one-upmanship got him. Whilst on safari in the southern region of Kanye, he was dragged out of his tent one night by a boisterous cackle of hyenas. And, as they tore and gorged at his pasty white flesh, the hysterical yips of the hyenas couldn’t help but remind him of Brendan Tucker and his colleagues back at the office.