Something has been on my mind this past month or so. And, after the tragic events that saw at least 84 people murdered in Nice yesterday, I feel compelled to write about it.

It’s not about the atrocity in Nice per se, but it is connected by how the perpetrator has – or will be – labelled by the media.

Thomas Mair – the man who murdered Labour MP Jo Cox – was immediately dubbed by the press as being mentally ill.

No doubt, the French-Tunisian man who killed 84 people in Nice will be dubbed a terrorist or Islamic extremist.

Why the difference in labels?

We know Thomas Mair had links to far right white supremacist groups. And we know that he called Jo Cox a ‘traitor’ because of her pro-EU stance. But still people say he must be mentally ill.

Why is a British white man who commits a politically motivated atrocity mentally ill, while an Arabic French man is a terrorist?

I’ll tell you why:

Because many British people share the same views as Thomas Mair.

They want England for English people. (And, by ‘English’, they mean ‘WASPs’: White Anglo Saxon Protestants. Not brown people who were born here. They don’t count.) They want foreigners out. They blame years of austerity measures on immigrants rather than the successive governments.

They don’t want to be identified as extremists or terrorists. So Thomas Mair’s mentally ill. He’s crazy. No normal person would do what he did.

Thomas Mair was radicalised by right wing groups like Britain First and the English Defence League. (As well as white supremacist groups in America.) I also believe that UKIP, Nigel Farage and other Brexiters who whipped up a storm of racial intolerance prior to the referendum had a role to play.

Hate crimes prior to, and following the referendum, were up 42% on previous years.

Are all these people mentally ill, or have they been radicalised?

Of course, I am not accusing all Brexiters of being right-wing-racist-radical-terrorists. Not even the majority of them. But some are.

And Thomas Mair definitely is.

It may well turn out that Thomas Mair does have a mental illness also. But that didn’t make him murder Jo Cox. His ideology did.

The man who murdered 84 people in Nice might have had a mental illness too. But I doubt he will be labelled as such.

Was what he did normal? Can any terrorist act be classed as normal behaviour? Are all terrorists mentally ill? Of course not.

Obviously you don’t have to have brown skin to be a terrorist. You can have white skin. Particularly if it has an Irish accent attached to it.

But not pure, white English skin. Because “we” don’t do that whole terrorist thing.

It’s Jo Cox’s funeral today. RIP young lady. You were a shining beacon of hope in a dark world. 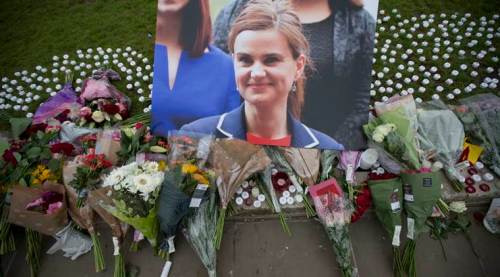 An image and floral tributes for Jo Cox, lay on Parliament Square, outside the House of Parliament in London, Friday, June 17, 2016, after the 41-year-old British Member of Parliament was fatally injured Thursday in northern England. The mother of two young children was shot to death Thursday afternoon in her constituency near Leeds. A 52-year-old man has been arrested but has not been charged. He has been named locally as Tommy Mair. (AP Photo/Matt Dunham)

There’s been a lot of talk of late about a referendum on Scottish independence.

By that, I don’t mean open up on ’em with a battery of Gatling guns. I mean, it’s their country, it’s up to them.

Some people say it will result in England, Wales, NornIrn and Scotland having less muscle in Europe.

Is that what independence is about – political and economic might?

I thought it was about being able to determine your own destiny.

But it did get me thinking about England and the proverbial divide between north and south and whether it was time for a referendum on whether we should split the country in half.

Below is a rough border of where I think England should be divided.

Then I was wondering about what we should call these two ‘new’ countries. And I couldn’t help getting my hackles up about when the glorious House of York was duped off the throne by that pesky Henry Tudor, (who was Welsh, by the way), and his turncoat ally, Lord Stanley.

So to redress the balance, and to give Yorkshire back its rightful inheritance, I thought this might be a suitable name for the new Motherland:

The Democratic Republic of Yorkshireland

Then I started to get a bit giddy. I don’t know if it was the power going to my head, or my formative years being filled with “Guess the pink bit” on the map of the world, but I thought this iteration was a marked improvement. 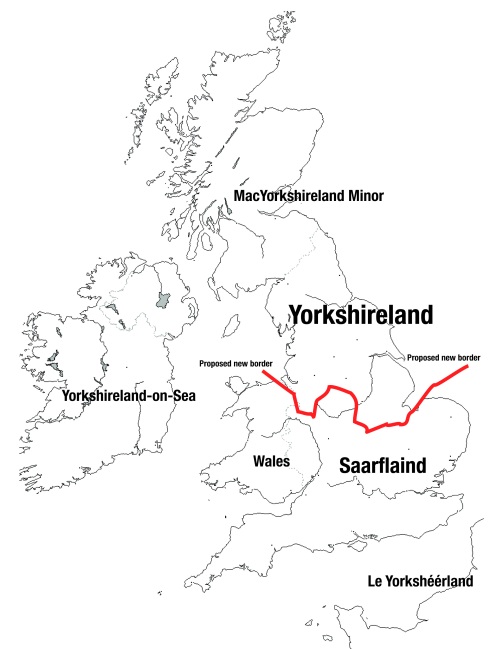 Of course, we’d need a new flag as well. I was thinking of something simple…

Anyhoo, I think it’d be a great idea. So, I’m nominating myself as the inaugural President of Yorkshireland.

All those in favour say: Aye, ‘appen as mebby.