Sorry, I couldn’t help myself.

Martin Parr would probably groan in pun-staking agony at that headline.

Martin Parr is one of Britain’s greatest photographers. Actually, make that ‘the World’s’.

He manages to capture the zeitgeist of working-class life in all its gaudy technicolour, wherever he goes. Whether that be Barnsley or Brazil.

He’s known for his satirical and ironic documentary-style images that look at our insatiable rapaciousness for consumerism. That, and people eating chips.

I’m not here to write his biography, just show you some of his brilliant work. If you’d like to know a bit more about him, his life, his work, his foundation and his legacy, click here. But if you just want to see more photos of people eating chips, scroll down.

If you want to have a look at some of his most recent projects, have a look here. You won’t be disappointed.

Peripheral Vision – out now on Amazon.

I know it’s only been a wet weekend since I published Ten Orbits of the Sun, but here is my latest offering, Peripheral Vision.

It’s a gritty, visceral and heartbreaking coming-of-age novel, about a young lad growing up in the north of England in the 1970s.

After being blinded in one eye by his abusive father, Peripheral Vision tells the story of 11-year-old Danny Kane growing up in 1970s northern England. His violent upbringing results in his descent into a life of drugs and crime. As he reaches adulthood he realises that the only way out of his spiralling slide into perdition is to find the one thing that he treasured most – his childhood friend, Sally, who was taken into care after the death of her mother. Can the search for his long-lost love lead to Danny’s redemption?

It tackles themes such as domestic violence, child abuse, drug use, gang crime, love and loss, and kitchen sinks.

I’m really pleased with it, and hope you are too. And no, it isn’t autobiographical – I have both my peepers intact!

If it’s not your cup of tea and you don’t feel like buying a copy, would you be so kind as to share the love and repost/retweet this, as I need all the help I can get.

Thank you, in advance. Your support is very much appreciated. 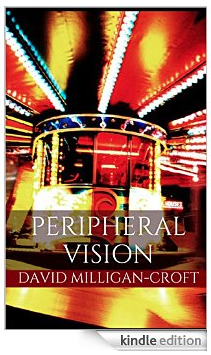